Peter Coombe is based in Bega NSW, and has been making instruments of the mandolin family since 1994, and began making guitars in 2010.  Many of his mandolins and mandolas have been exported to the USA and Europe. 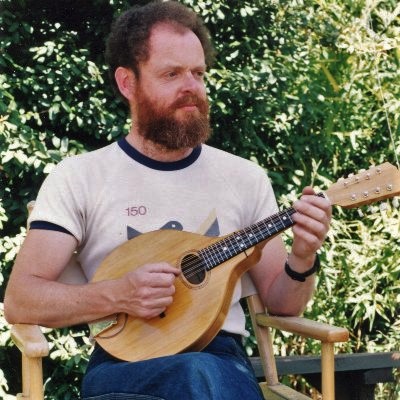 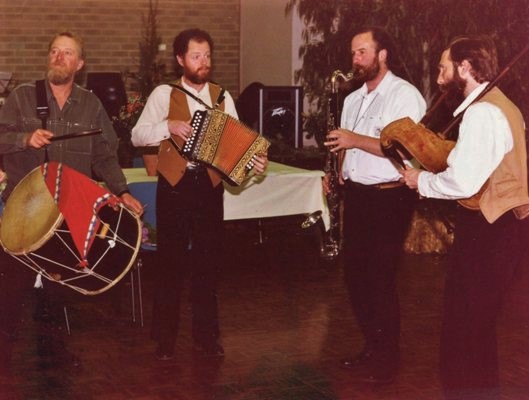 A band Peter played accordian and mandolin in for many years. 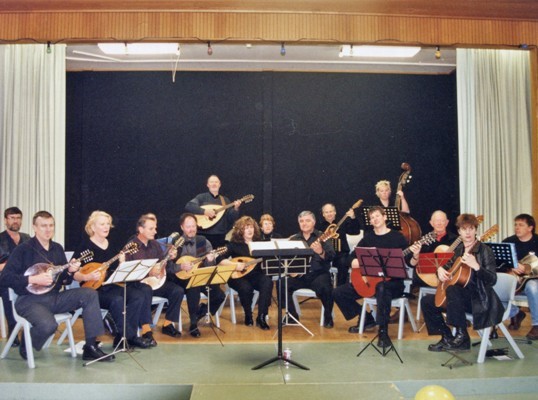 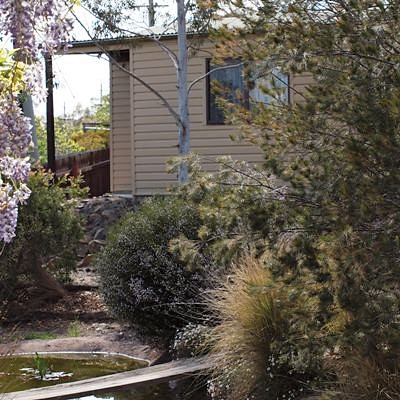 The old workshop in Canberra 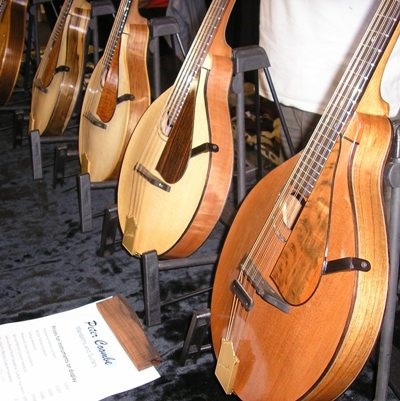 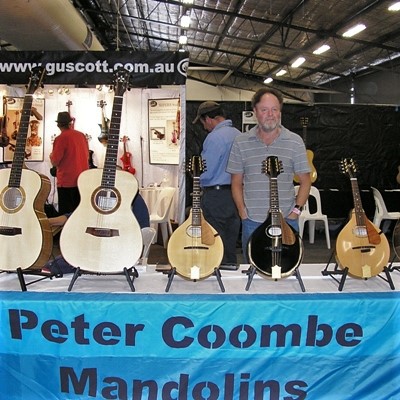 Display at National Folk Festival in 2012 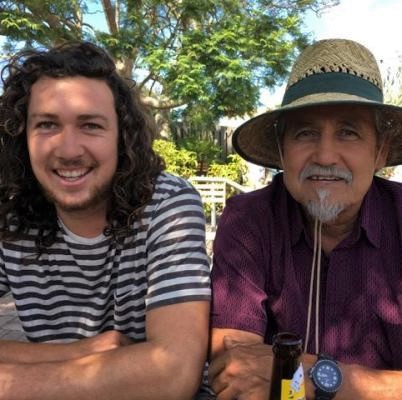 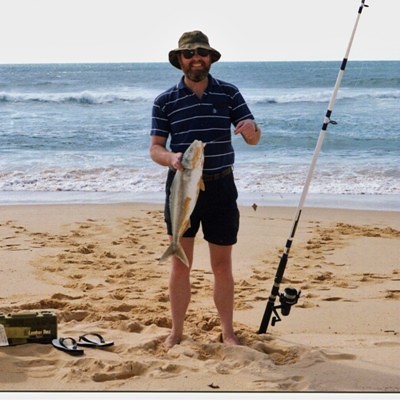 One good reason we moved to Bega.  Fishing on Bournda beach 1998

I am basically a musician turned Luthier. After 16 years of making mandolins after work and on weekends, we finally moved into the new house and workshop in Bega and I became a full time Luthier in 2010.  Computing used to pay the bills, but after being downsized by my employer, the mandolins (and now guitars) are playing a much larger role.  Quitting the "real" job was the best thing I ever did.

I started playing music at the age of 7, and played the piano for over 13 years. In the intervening period I have played guitar, recorder, piano accordion, button accordion, violin (complete failure) and mandolin, and am presently trying to get back into playing piano again. We bought a beautiful sounding grand piano and the cost of the thing is a good incentive to play it.  The good sound helps as well.

I started playing the mandolin around 35 years ago on a factory bowlback I bought in Germany, but eventually it was obvious the instrument was somewhat limiting and my better half was complaining about the sound. Fortunately, a musician friend visited the USA about this time and he brought back a vintage 1918 Gibson A1 for me. I played this instrument for over 8 years in various dance bands and loved it to death. It is one of the better vintage Gibsons and is somewhat battered, but structurally sound and stills sounds great. In all that time I only came across one other mandolin that came close to the Gibson in tone and playability.

Around 1993, a number of people who had seen my old Gibson started asking me where they could get a good mandolin for a reasonable price. After doing a bit of research, I came up with the answer - no idea. All the music shops had Korean imports that looked OK, but were absolutely dead tonally and difficult to play. Anything decent, e.g. vintage Gibsons, on the second hand market were outrageously expensive; about 4 times what mine had cost. Now this situation from a musician's point of view is not good (where are all the mandolin players?) and got me thinking that maybe I could do something about it. At the time I was building high quality Hi Fi loudspeakers and was getting rather sick of working with MDF and chipboard.

From the age of 13 I have always loved to work with wood. I used to spend countless hours as a teenager in the backyard shed hacking at a bit of wood with a chisel or plane. Apart from the loudspeakers, I had built furniture and various other smaller things from wood. Thus I already had all the basic woodworking skills, the ability to listen to subtle sound changes, and had a long standing ambition to build a musical instrument. Why not build a mandolin? It was an instrument I was very familiar with and I already had a good specimen to copy. What followed was about a year of research and preparatory work. Things such as what timber to use, specialised tools, suppliers of timbers, tools, parts etc. all had to be worked out. Fortunately, my friend Gillian Alcock was very encouraging and helpful. Finally, the first mandolin emerged amid much excitement.

This is where my perfectionist tendency kicked in. The first instrument sounded very promising, almost as good as the Gibson (not bad for my first effort) and didn't fall apart, but I knew I could do much better. Soon a second instrument emerged, then a third and a fourth and so on. Each one better than the previous. One year later, much to my surprise and delight, I was making mandolins that were sounding consistently better than the old Gibson. The Gibson was confined to the cupboard: dragged out occasionally for comparison purposes and measurements.

Since that time, steady improvements in build quality, bracing, finish, playability etc, have been incorporated. I learned the skill of tap tuning, which resulted in a 'quantum leap' improvement in the tone of the instruments. I gained the respect of some of the best mandolin players in the country (and overseas countries as well); some of whom have bought my instruments. I also have the great pleasure of playing the best sounding mandolins that have ever been through my hands, and have as friends some of the best known Luthiers in Australia and the USA.   However, as a musician, I still believe that the average mandolin player should be able to purchase a good quality instrument without having to take out a second mortgage. Without that, there will be no mandolin players.  So, I have confined my mandolin building to A model mandolins not just because I like the elegant simplicity of the A models, but also because they are far less work than a F5 mandolin to make, so I can offer outstanding quality that most people can afford.

A few years ago I was completely swamped with orders so the waiting list blew out to an uncomfortable 3 years with some people waiting over 3 years.  That is a stressful situation for a Luthier and I must admit to struggling to cope with the full time job and a long waiting list.  However, I have finally managed to work through the backlog and now that I am a full time maker, customers usually get their instruments relatively quickly, hopefully in no more than 6 months.  I am now also able to offer a lot more mandolins and mandolas as finished instruments available for immediate delivery.  Soon after moving to Bega I needed some new challenges so started work on making a guitar.  The same thing happened.  One guitar, then a second that was better, then a third that was better again and so on and so forth.  The guitars are sounding damn good now, I can't find any that I like more than my own and people are starting to notice.

Woodcrafts Guild of the ACT exhibition 1994, Best in the Show - pair of mandolins.